Echodrive’s music focuses on self-discovery, finding our own truths, and moving on in a positive direction – despite the struggles life brings us.

“Echodrive is a talented and effective band.  The music they create has a heartfelt message that’s unique and rarely witnessed.  I expect big things to come for them.”  -Edis Kittrell/ KGLT Radio

“You can tell these guys put their hearts and souls into each song, which is extremely refreshing these days.”  -Aaron S

“A repository of positive energy wrapped in groovy, accessible pop…performed with passion and sincerity.”  -Paul J

“What I love most about the music is the message…it’s always deep and meaningful.”  -Sarah S

“If you don’t mind songs that have something to say, might actually cause you to think, and that can still rock or hold down a groove, then you need to check out Echodrive.”  -Gil Stober, Producer/Engineer at Peak Recording Studio

“Gotta say – I REALLY like this…Very catchy and can’t get it out of my head!”  -Dave Penn/Hit Songs Deconstructed 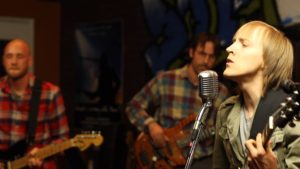 The music of Echodrive creates a visceral landscape, with sounds that span genres and defy the conventional trappings of pop.  Often compared to bands like Imagine Dragons, Linkin Park, and Red Hot Chili Peppers – Echodrive brings a powerful sonic punch to each song.

Formed in the summer of 2015, Echodrive was built to replicate the energy of frontman Andrew Hand’s recorded catalog.  Having shared stages with internationally recognized acts such as Nikki Lane, Bass Nectar, The Wailers, Robert Randolph and the Family Band and playing to audiences of 5,000+ across the US, Echodrive continues to reach new fans through engaging shows that leave an impact long after the last chord has rung out.

In speaking about forming the band, Hand said, “This was something I had to do.  I’ve got a purpose that’s bigger than me.  I want to create songs that really speak to people where they’re at in life…and for those songs to be something positive for them.”

When asked what sets Echodrive apart, Hand had this to say – “It’s not that I’m saying things that haven’t been said, but I’m saying them as me, with my unique lens.  I’m creating with the intention to make a positive difference for those who hear my music.  I think by just being ‘you’ that automatically sets you apart, because no one else on the planet can ever be you.”

To inquire about bringing Echodrive’s music and message to your audiences contact them.